Skip to content
I wanted to share a story of mine that just came out in the new Chicken Soup book : Volunteering & Giving Back.  I’d love to hear about the volunteer experiences that have inspired you.
Warmly, Deborah 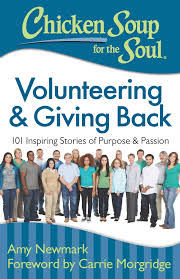 The Work of Our Hearts

I woke up in the middle of the night with the answer I’d been seeking: I would self-publish the book of essays I had written about my journey through my mother’s Alzheimer’s and I would donate all the monies from the book to Alzheimer’s research and programs.

It was the summer of 2006, and for weeks I’d been wrestling with a question:

Should I seek a traditional publisher or independently produce the book? Both seemed daunting; in the past, I had primarily written books for and with other people and publication wasn’t my problem. But this book, Love in the Land of Dementia: Finding Hope in the Caregiver’s Journey, was the work of my heart, born out of my desire to stay connected with my mother and find the joys and blessings in her experiences with Alzheimer’s. I wanted to share my stories of hope so they might help other caregivers.

“What about donating a portion of the proceeds?” my partner Ron asked. I was already making a marginal living; Ron’s suggestion was practical but I shook my head.

“I think I’m supposed to donate it all,” I told him. “That way, instead of selling a book, I’ll be raising money for a cause I’m passionate about.”

I talked through the details, consulting knowledgeable friends, an attorney and our local Alzheimer’s Association. My mission: to use the book as a catalyst to raise $50,000 for Alzheimer’s. There was one glitch; I estimated the cost of designing and printing could be in the thousands. Where would I get the money? But even though I was often worried about funds, this hurdle didn’t bother me. My intuition was strong. I was supposed to do this and would raid my savings if needed. Ron was excited about the project and pledged to work with me and help me make it happen.

“We will also help you,” my friends Rex and Jane said. They had shepherded several books through production and were extremely savvy. Plus, they wanted to be part of my mission.

Over the next months, Ron and I spent hours with Rex and Jane, working on design, cover, production and print details. Endlessly patient, they were dedicated to creating the book I envisioned. And they kept their fees to a minimum.

When the finished product arrived months later, I felt a sense of pride and completion. The beautiful cover featured one of my mother’s paintings, the type was easy to read, the interior design inviting.

Ron and I had often performed my stories together, and we began speaking and sharing stories from the book with Alzheimer’s associations, healthcare professionals, caregivers’ groups and others. When we traveled, we reached out to Alzheimer’s groups to set up speaking engagements. We were always moved and inspired by the people we met.

“The person with Alzheimer’s is the pupil in God’s eye,” the priest in a fourteenth-century church in Florence, Italy told us.

“Your story is my story,” a man in Istanbul, Turkey said.

“I’ve been caring for my mother for ten years,” a woman from Brooklyn, New York said. “It has been the most meaningful experience in my life.”

“When I learned Mama had dementia, I quit my job in Houston and moved back home,” a woman in St. Thomas, Virgin Islands said. “I wanted my children to know their grandmother in all the stages of her life and I wanted to be here to care for her.”

Sometimes we spoke in front of hundreds of people; other times we talked to groups of ten. When possible, we brought books and people often donated more than the suggested fifteen-dollar price, knowing that all the proceeds went to Alzheimer’s research and programs.

By 2011 we had done it! We had raised $50,000 for Alzheimer’s. But we kept going; we were still learning and growing. The work was healing for both of us and we loved connecting with other caregivers.

In 2012 I was ready to give the book a wider distribution and reached out to Central Recovery Press. They published an enhanced edition in 2013. Today, our fundraising journey continues as we donate a portion of our proceeds to this important cause.

The self-published version of Love in the Land of Dementia served as a catalyst for raising more than $80,000 for Alzheimer’s programs and research. My stories of looking for the blessings in the journey reached thousands of people, fulfilling my goal of making a contribution to the world. And the bonus was that both Ron and I had changed.

By following our intuition and doing the work of our hearts, we became more compassionate, understanding and trusting.